What to see in Madrid in 2 days

If you are thinking about spending some days in Madrid this is your post .Or if you are already here and you don’t want to miss important places, we give you some clues about What to see in Madrid in 2 days.

So, why not start by kilometer 0? Or which is the same, the Puerta del Sol. It may be curious that this central point in Madrid life was originally outside the city. It was one of the gates that used to close the city wall by East, which explains its name (Gate of the Sun). Nowadays, it is a crossing and a meeting point par excellence. However,  we recommend you to stop there for a while because you will surely find some interesting activities to see or to join.

There is not a single day that a more or less mass meeting or demonstration is not celebrated here. May be you are willing to join.

If you prefer something less demanding you will surely also find circles of public around a magician. Or a group of skaters or the latest and most original living statue. Nowadays, it is a crossing and a meeting point par excellence. However we recommend you to stop there for a while because you will surely find some interesting activities to see or to join.

The square symbols are the Kilometer 0, the clock in the Royal Mail House that marks the New Year and the sculpture with the bear and the arbutus, which is also a symbol of the city.

Not far from there, there are two emblematic and historical squares too: Plaza Mayor and Plaza de la Villa. Both are part of Madrid of the Habsburgs, although the Plaza de la Villa is even older than the Habsburgs period (XVI-XVII centuries). It has been connected to the government of Madrid for centuries, until the City Council was transferred to the Palace of Cibeles in 2007.

This is one of the most enchanting squares in Madrid and its buildings hold a longer history: the Casa de los Lujanes (Lujanes’ House), the Casa de Cisneros (Cisneros’ House) and the Casa de la Villa (Town Hall), all of them guarded by admiral Álvaro de Bazán, portrayed in a sculpture by Mariano Benlliure.

The Plaza Mayor also used to exist before the Habsburgs, known as the Plaza del Arrabal (Square of the Suburb), but Philip II drove its refurbishment in order to transform it in the meeting place par excellence for his new Court and in the place for celebrating the glory of his empire. Fires suffered by the square and the passing of time have partially changed its features, but its magnificence and its majestic aspect endure intact. 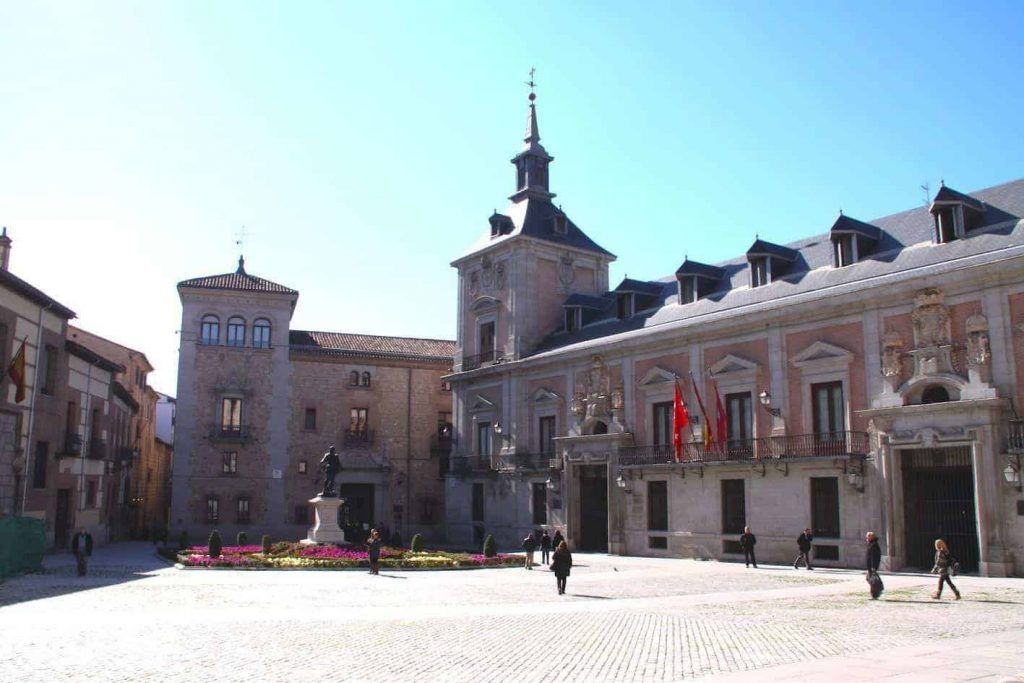 And we go on with a no less outstanding square and, no doubt, one of the most beautiful places to see twilight in Madrid, the Plaza de Oriente, which is part of the Royal Palace complex, another must.

It is still nowadays one of the most sumptuous and big palaces in Europe; it is worth of a visit but, if you prefer not to stop here, you can’t at least miss a stroll around the beautiful Sabatini Gardens and sit down on any bench in the square to admire the monumental environment, that includes also the impressive Philip IV’s equestrian statue and the Royal Theatre.

But we will not speak only about squares in our suggestions. If there is something that attracts tourists and that has turned into a symbol of Madrid, that is the Art Promenade, that scarce one-kilometer area in which three of the most important art galleries in the world are gathered, as well as a good quantity of the Painting masterpieces of all-time.

Let’s start in chronological order by the Prado Museum, which holds an incomparable collection of Spanish and European painting until the XIX century.

It has its origin in the Royal Collections, to which we owe some of its most outstanding treasures. We find amazing paintings such as Las Meninas (The Maids of Honour) by Velázquez, The Three Graces by Rubens, The Garden of Earthly Delights by Hieronimus Bosch or Charles IV of Spain and his Family by Goya. Among many other no less important painters, such as El Greco, Murillo, Tiziano, Tintoretto, Dürer and a long etcetera.

Much less known is the Classical sculpture collection, with the same royal origin and with a quite high quality too, so don’t miss it while walking along the Museum.

Let’s go on with the Thyssen Bornemisza Museum, formed by collections that cover from the XIII until the XX century, part of them property of the Spanish State and part of them ceded to it.

The Portrait of Giovanna Tornabuoni by Ghirlandaio, the Dream caused by the Flight of a Bee around a Pomegranate a Second before Waking up by Dalí, Mata Mua by Gauguin or the Harlequin with a Mirror by Picasso are just some of the many masterpieces held by this museum.

And we will finish with the Reina Sofía Museum, devoted to contemporary art.

Reina Sofía Museum – Its most emblematic work is, no doubt, the Guernica by Picasso.

The Reina Sofia rallied around by equally essential works by other key Spanish artists during the XX century, such as  Dalí, Miró or Chillida. The Avant-garde collection specially stands out too, with works by Magritte, Juan Gris and Francis Bacon, among others.

This modern art Museum is, thus, a place you just can’t miss if you wish to understand Art during last century.

Finally, the Caixa Forum share room with this trio of great museums. It offers original temporary exhibitions and an interesting cultural offer. Just the building with its hanging garden are worth a halt to contemplate it.

Very near from this area is the Retiro park, which we wrote a post of some days ago. We told you then its origin as the gardens of the Buen Retiro royal complex and how with the passing of time it became a public garden to be enjoyed by all Madrilenians, that still enjoy it nowadays, as you will be able to confirm whatever the season you’ll come.

The park offers attractions like boat rides, exhibitions in the Casa de Vacas, the Palacio de Velázquez or the Palacio de Cristal, an endless number of walks to never get bored and unmissable events like the Book Exhibition at the beginning of June.

But if football is your favorite sport, no doubt the pilgrimage destiny par excellence in Santiago Bernabeu Stadium, home of the Real Madrid.

It is an impressive concrete block that in match days becomes a sort of massive ant’s nest that bustles with enthusiasts going in and out.

If seeing the stadium out is not enough, you can join the tour in which trophies. You can also go to the field, the changing rooms and benches are also shown, so you won’t miss a detail of the more than one hundred years of the team history.

For those of you who prefer shopping, the starting point will be the Golden Mile. That’s to say the commercial axis of Serrano Street and all the adjoining ones, no apt for every wallet, but at least for every look.

Another reference shopping area in Madrid is the one comprised between Puerta del Sol and Gran Vía .

This promenade will give you the opportunity of walking along this emblematic and already centenary street.

And if you are looking for something more original and unique, we recommend you the area around Fuencarral Street and the Corredera Baja de San Pablo. Do not miss as well Huertas Neighborhood. That will surely not disappoint you.

Don’t think these are all the possibilities that Madrid can offer to you, not at all! This is just an appetizer .  We will be delighted to accompany you within our guided tours . And show you every secret of the city that you wish to discover. We are waiting for you!

Este sitio utiliza Cookies para incrementar la experiencia del usuario en su navegación por la web. Además, algunas de las cookies son necesarias para el buen funcionamiento del portal de Madrid and You. Usamos también cookies de terceros para analizar el uso y comportamiento de los usuarios. Solo se almacenarán en tu navegador si lo aceptas expresamente. También puedes obviar estas cookies. Pero si lo haces, puede afectar al rendimiento de la web.  This website uses cookies to improve your experience while you navigate through the website. Out of these, the cookies that are categorized as necessary are stored on your browser as they are essential for the working of basic functionalities of the website. We also use third-party cookies that help us analyze and understand how you use this website. These cookies will be stored in your browser only with your consent. You also have the option to opt-out of these cookies. But opting out of some of these cookies may affect your browsing experience.
SAVE & ACCEPT